Games or competitions in bold denote a championship win for region or NWAC.

Expand all Collapse all 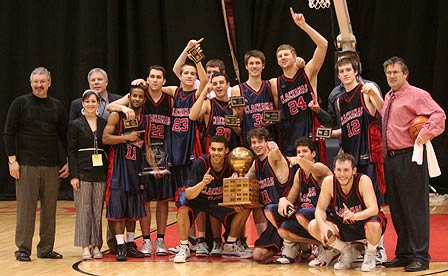 Kennewick, WA. - The Cougars defeated second-ranked, North Division Champions, Bellevue Bulldogs (15-1, 28-4) 67-56 in a match that was a battle until the closing minutes. For the Cougars, the championship game win put the finishing touch on a dream season: a perfect run through the South Division at 14-0, a 21-consecutive game winning streak to finish the season, a march though the NWAACC championship that vanquished the division champions from the West, East, and North division on three consecutive days, and a final, convincing statement to justify the team’s #1 ranking in the NWAACC coaches’ poll. The team’s final win, its 29th of the season, established an all-time record for wins in a season at Clackamas Community College. Here is summary off all four tournament games:

The Cougars opened 2007 NWAACC Tournament action facing a familiar opponent; Blue Mountain had beaten CCC in a preseason game in December. But it was all Clackamas in the rematch as the Cougars jumped out to a 13-3 lead. They kept the Timberwolves unbalanced throughout the first half and led 41-3 at intermission.

CCC held BMCC at a comfortable distance throughout the second half, winning by a final score of 87-75. The Cougars shot 50% from the field and 65% from the free throw line. CCC also converted 18 Timberwolf turnovers into 16 points and out rebounded their opponents by 42-40 margin.

Clackamas and Highline matched up in what might go down as one of the most memorable games in tournament history, a thrilling double overtime nail biter! Some billed it as the championship game; in retrospect, it may well have been. Highline jumped out to a 13-3 lead, forcing the Cougars into calling a time-out to regroup. Switching to a zone defense, CCC battled back to a 20-20 tie. But the Thunderbirds, West Division Champions, spurted out to a 34-24 lead. But the Cougars roared back, showing everyone in the arena how champions respond by finishing the half with a gutsy 10-0 run, capped by a sensational steal by Stephen Vaughan. He drove the length of the floor and dished the ball to Maurice Ross who drained a 3 at the buzzer.

The Cougars had fought back to a 34-34 tie! The second half was as intense and competitive as basketball can be at the NWAACC level. At the end of regulation, the sensational Cougar defense came up with one more huge stop to give themselves the opportunity to win the game. With two seconds to go CCC flawlessly executed a full court inbounds play. Alex Brock’s 3 point shot at the buzzer brought the entire arena to its feet as it rolled around the rim and popped out. In the first overtime the Cougars dominated action to take a
five point lead, but failed to put the Thunderbirds away, missing several big free throws and then turning the ball over on their last possession.

In the second overtime, the difference was the defense and rebounding of the CCC team, coupled with balanced scoring from four players that carried the Cougars to the win. Clackamas shooters struggled throughout the game, shooting 40% from the field, 33% from the arc, and 60% from the charity stripe. For the game, Clackamas played just a little better basketball, grabbing 52 rebounds and only committing 11 turnovers.

Stephen Vaughan put on a memorable and sensational performance, hitting 9 of 12 shots and both his 3’s for a 30 point outburst. He also grabbed 9 rebounds and registered 2 assists, 2 steals, and 3 drawn charges. David Cernin tallied 17 points 7 rebounds, 3 assists, and 3 steals. Brian Freeman scored 19 points and cornered 17 rebounds in another tremendous individual effort. Maurice Ross led his team with sensational defense, 9 points, and 5 assists. Nick Eldridge chipped in 3 points, 3 rebounds, and 3 assists. Alex Brock added 6 points, a huge assist , and a blocked shot. Nathaniel Germaneri was good for 2 rebounds, 1 assist, a blocked shot and a steal; his defensive intensity was an inspiration to the Cougars. Luke Defrees completed an outstanding defensive assignment and also scored a huge 3 pointer when the Cougars needed a boost in the first half.

For the Cougars, the hard fought victory extended their win streak to 19 games and put the Clackamas program in the semifinals for the third time in seven years.

Clackamas faced its second league champion in as many nights, taking on the third-ranked Warriors from the East Division. The Cougar defense deserved the game ball for this victory, holding the up-tempo Warriors to their lowest total of the season. CCC used a solid first half to take a 39-28 advantage at the break. Then they held off several furious Walla Walla rallies
to claim the win.

CCC out-rebounded their opponents by a 49-40 advantage and also claimed a 18-8 edge in second chance points. The defensive trio of Maurice Ross, JR Morgan and Luke Defrees, limited Walla Walla’s key offensive player averaging 18 ppg.) to 3 points on 1-8 shooting. Ross also added 8 rebounds and 5 assists, while Defrees, a sophomore co-captain, nailed 3 threes and finished with 11 points and 2 rebounds. For the game, the Cougars converted 43% of its field goals, and 71% of its free throws.

Brian Freeman punished the Warriors inside, hitting 14 of 19 shots, and 8 of 11 free throws, for a career high 36 points. Freeman also grabbed 18 rebounds, and blocked 3 shots. Stephen Vaughan fought the bigger Warriors inside for 10 points and 9 rebounds. Nick Eldridge added 5 points, 2 rebounds, and 2 steals. David Cernin tossed in 10 points, grabbed 4 rebounds, dished out 5 assists, and had 5 steals. Nathaniel Germaneri sparkled again with 3 points, 2 rebounds, 2 assists, and 2 steals. The win kept the Cougar victory string intact at 20 games, and put Clackamas in the title game for the first time since 1994.

The top-ranked Cougars faced the daunting task of defeating a third consecutive region champion in as many nights-- a first in tournament history. It looked bad early, as CCC was outscored 5-0 to start the game. But being a champion is about heart, and the Cougars roared back, eventually taking a 20-11 lead. At the half it was Clackamas 36, Bellevue, 27.

The Bulldogs fought back to a 50-50 tie in the second half, but the top-ranked CCC team refused to yield to the second-ranked North Division Champions.

Again, it was Brian Freeman who kept the Cougars in control. The Cougar big man had 18 points, 10 rebounds, and 2 assists, capping off what will surely go down as one of the most sensational four day tournament performances by a post player in NWAACC history.

David Cernin also made huge plays when his team needed them the most; he finished with 17 points, 2 rebounds, 5 assists, and 3 steals. Steven Vaughan added another inspirational defensive effort to his 11 points and 5 rebounds. Maurice Ross also showed up impressively on the defensive end while adding 4 points, 6 rebounds, and 7 assists. JR Morgan also contributed to the Cougar guards’ dominance by giving the Bellevue backcourt fits and dishing out 2 assists while attacking the BCC defense.

Nick Eldridge also anchored the defense while hitting for 7 points and fighting for 5 tough rebounds. Nathaniel Germaneri chipped in another superb defensive stint to go with his 2 points and 3 rebounds. And Luke Defrees again contributed a courageous effort, flawlessly filling a challenging defensive assignment; he finished with 8 points and 4 rebounds, while hitting 5 of 6 free throws at crunch time to keep the Bulldogs at bay and salt the win away.

For the game, CCC beat the bigger Bulldogs on the boards, 42-36 and also outscored their opponents 18-6 at the three point line. Clackamas shot respectably: 41 % from the field and 71% from the line. Also clearly in evidence in the title game was the hallmark of the CCC program: passing and team play--the Cougar TEAM assisted on 19 of their 23 baskets!

Three CCC players were selected to the all tourney team: Steven Vaughan for the second team, David Cernin for the first team, and Brian Freeman as the tournament MVP.